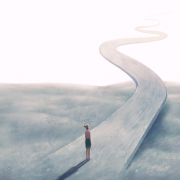 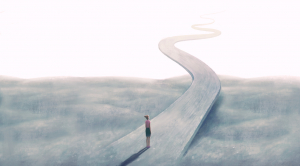 Have you ever felt you can never fully understand who God is or why Jesus died for you? Sara Webb shared her own story of how she felt constrained by her human understanding of who God is with the women of Fifth church at the Lenten Worship Gathering on Saturday, March 19. Director of Capernaum Young Life, Discipleship and Learning, Sara outlined her journey from a very limited view of God and an inability to understand why Jesus Christ sacrificed himself for her to letting her imagination create a new and bigger picture of God and his love for her. 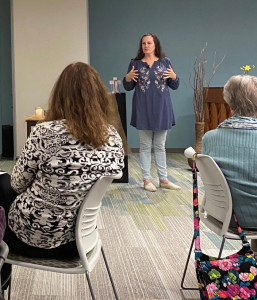 She began with Jesus’ message to his disciples as he was nearing the end of his earthly ministry.  He had alluded to his death several times before he told his disciples: “Greater love has no one than this: to lay down one’s life for one’s friends.” (John 15:13) She imagined that the disciples must have been confused by Jesus’s statement, just as she was. How could the Son of God make such a sacrifice for them – for us? He is perfect righteousness, and we are tainted by sin from the moment of conception! Lay down one’s life for his friends?

The book of John was originally printed in Greek, so Sara investigated the meaning of the Greek word for friend (philoi). Turns out the meaning of philoi is deeply rooted in the concept of reciprocity; encompassing the exchange of favors and support, in addition to a profound sense of duty to each other. Philoi typically encompassed family members foremost. Suddenly, she was no longer “just a friend” of Jesus; she was family!

It was time to really imagine what it meant to be a daughter of God. Her journey took her all the way back to the creation story, and she let her imagination truly take hold. She imagined how God existed before creation began. She imagined God’s work each day in great detail, and she asked her audience what God said as he completed each creation task. “It was good,” was the resounding response.

On the sixth day he created man, male and female he created them, in his own image. Imagine it: God reaching down to gather up the dust of the newly created earth, then forming man. Next, God retrieved a bone of this new man and fashioned a woman around that bone. Finally, God gently breathed his breath into them, and on that day he declared his work was VERY GOOD.

God created his beloved ones to have dominion over all creation. Sara could imagine God bringing each new creature to Adam and saying, “Tah-dah!” In Sara’s mind, Adam had to be blown away by each new animal, bird, fish, etc.  and struggled to come up with names for all of them. What a beautiful and perfect relationship!

Next up – the fall. Adam and Eve disobeyed God, and when they heard him walking in the garden, they hid from him. Sara could only imagine how God must have felt by her own reaction when her children disobey her – anger! However, in the story of Genesis, God gently questions them, then describes the consequences of their disobedience.

But that’s not the end of the story! He lovingly cares for them by making clothes for them. He escorts them out of the garden and sets up an angel and revolving sword at the garden’s entrance to prevent them from returning. Was that further punishment! No, that was to prevent them from eating the fruit from the Tree of Life and being condemned to living in a state of sin eternally. He was protecting them from themselves!

And the crowning glory in God’s redemption of His beloved children is the life and death of Jesus Christ. God took on human form and walked among his amazing and flawed creatures. He led an exemplary life, taught us how to glorify our God and Father despite our sinful natures, and became the final sacrifice for the sins of us all.

Jesus Christ: the Lamb of God, the Light of the World! Imagine the miracle of his life, death and resurrection anew this Lenten season.